The Abraham Accords was initially a joint statement of Israel, the United Arab Emirates and the United States, reached on August 13, 2020[1] and subsequently also used to refer collectively to the peace agreements between Israel and the United Arab Emirates (the Israel–United Arab Emirates normalization agreement) and Bahrain, respectively (the Bahrain–Israel normalization agreement).[2] This was the first time any Arab country had normalized relations with Israel since Jordan in 1994. The accords were signed by Bahrain’s Foreign Minister Abdullatif bin Rashid Al Zayani, UAE’s Foreign Minister Abdullah bin Zayed Al Nahyan and Israeli Prime Minister Benjamin Netanyahu on September 15, 2020 at the South Lawn of the White House in Washington, D.C.[3]

The peace treaty with UAE is officially titled as Abraham Accords Peace Agreement: Treaty of Peace, Diplomatic Relations and Full Normalization Between the United Arab Emirates and the State of Israel,[4][5] The peace deal between Bahrain and Israel was officially titled Abraham Accords: Declaration of Peace, Cooperation, and Constructive Diplomatic and Friendly Relations, announced by the United States on September 11.[4]

Though Bahrain and the UAE had never been involved in a war with Israel, Gulf countries had boycotted Israel since its independence in 1948. Arab countries however gradually developed clandestine relations with Israel over the years.[4] The State of Palestine quit its role as the chair of Arab League to protest the accords.[6]

The accords are named after the patriarch Abraham, regarded as a prophet by both the religions of Judaism and Islam, and traditionally considered a shared patriarch of the Jewish and Arab peoples (by way of Isaac and Ishmael).[7] 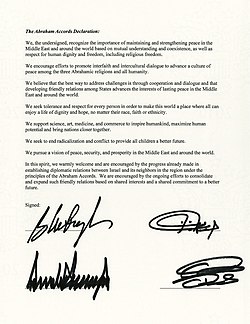 The documents related to Abraham Accords are as follows:

An analysis by Israeli newspaper Haaretz said that the four parties first signed the Abraham Accords Declaration, a “general, symbolic statement of intentions” and referred to the three documents signed as “a bunch of statements in support of global peace of the type normally made by winners of the Miss Universe pageant.”[11]

At the signing, Trump said five nations could soon follow including Saudi Arabia, although analysts believe Sudan and Oman are more likely candidates in the short term.[12] On September 23, 2020, US Ambassador to the United Nations Kelly Craft said that a new country will recognize Israel “in the next day or two.”[13] On September 26, 2020, Sudanese Prime Minister Abdalla Hamdok said it did not want to link its removal from a US terrorism list to normalizing relations with Israel as asked for by the US.[14]

While the two countries had long-maintained defacto recognition in areas of business including the diamond trade[15] and high tech industries including artificial intelligence[16] and defence,[17] the accord opened the door to a much wider range of economic cooperation, including formal investments. Abu Dhabi Investment Office opened its first overseas branch in Israel.[18] A number of kosher restaurants were opened in the UAE to cater to Jewish visitors.[19]

Back to Course
Next Lesson
Login
Accessing this course requires a login. Please enter your credentials below!
Lost Your Password?